The “I want life” concert held on December 19th on Zagreb’s main square, the 9th in a row, gathered more than 25,000 citizens who attended and thus showed their support for the work of the Ana Rukavina Foundation.

During the singing musical night, the citizens did not forget about solidarity toward the severely ill in Croatia and the world, and they proved this by calling the humanitarian number 060 9000 more than 193,000 times and by donating more than 1.2 million kuna to the further work of the Ana Rukavina Foundation. For all the citizens who could not participate in the concert, the Foundation’s media partner and co-organizer of the concert, Nova TV, provided a live broadcast of the event on Nova TV, on the portal dnevnik.hr, and on OYO. The citizens, who with dance and song celebrated the most precious thing – life, succeeded to once again stop the traffic of ZET’s trams.

“I am grateful to all the citizens who have joined us this evening. The citizens of “Our beautiful homeland” have once again shown their kindness toward those that are severely ill in Croatia and the world because with their calls they have enabled the Foundation to continue its mission of expanding the Registry. The Croatian Registry has recently led to the realization of the 44th transplantation of hematopoietic stem cells, which gives those that are suffering a new chance at life and provides us with an added incentive for our work,” said Marija Rukavina, director of the Ana Rukavina Foundation. 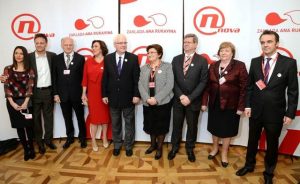 Prominent people from Croatian public life were joined in the call center in Gradska Kavana by the Croatian president, Ivo Josipović, the president of the Croatian Parliament, Josip Leko, and a number of members of the Government of the Republic of Croatia.

The results of the efforts of the Ana Rukavina Foundation and the Croatian Registry of potential hematopoietic stem cell donors, which currently counts more than 46,000 potential donors, are proof that the citizens have more than a good reason to celebrate. The Ana Rukavina Foundation has organized 262 public actions all around Croatia to join the Registry, which has issued 44 transplants to those suffering in Croatia and the world. These numbers give those that are suffering a new chance at life, and it provides the Foundation with an incentive to continue its work.

Once again, we would like to sincerely thank all of you who joined us on the square and in front of your small screens. With your calls you donated more than 1.2 million kuna for the Foundation’s further work!