On Monday, May 12th, at the action to join the Registry of voluntary hematopoietic stem cell donors held in Požega, a total of 92 citizens joined the Registry. By donating blood at the action, which we organized at the request of Mrs. Irena Jurković from the City Library and Reading Room, the citizens of Požega increased the chances for life of those who are severely ill.

All of the citizens who took part in the action to join the Registry were able to find out exactly how the Foundation operates based on the experience of Ankica Begić whose life was saved by an American Indian from the Comanche tribe. Ankica Begić took this opportunity to present her book Comanche Indian – My Blood Brother. This is a journal in which she wrote about her treatment and meeting her donor, and which can be used as an educational tool for all those who find themselves in a similar situation. If you have not already downloaded the book, you can find it on our web site here. 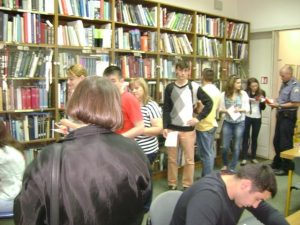 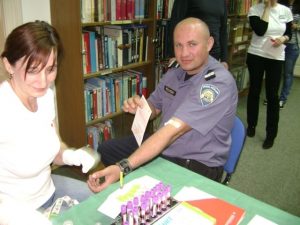 We are sincerely grateful to Mrs. Irena Jurković for the invitation and the friendly staff at the City Library and Reading Room Požega for the well organized action to join the Registry and the promotion of Mrs. Begić’s book.

We would also like to thank all the young people who took this opportunity to join the Registry. Most of them were future graduates of the Požega Secondary School and we want to wish them good luck with their graduation exams!