Ana was awarded with ‘Zagreb woman of the year’ award

“This is for the first time that I award this public acknowledgement of Zagreb City for “Zagreb woman of the year”, said Tatjana Holjevac, the president of the City Council, and accentuated how Ana Rukavina-Erceg deserved it by her courage and sensibleness, because she showed that it is possible to gather the people around common good even in the moments many consider impossible.
The actress, Anja Šovagović-Despot red the letter of Ana Rukavina-Erceg called “I want life!”.

“In her letter filled with living optimism, despite the difficulty of the moment, close to the thin line separating life and death, she discovers the possibility sprouting from something that people rarely show de to various reasons and that’s the capacity to understand and sympathize with other people’s troubles. “Her appeal succeeded”, said Holjevac.

Zagreb mayor, Milan Bandić, said that the Foundation, which is helping those fallen ill from leukemia and lymphoma and bearing her name was established thanks to Ana Rukavina-Erceg, who died in November last year from leukemia and the Registry of potential bone marrow donors grew from 150 registered at the beginning of 2006 to 13.000 at the moment.

“I am proud that Ana was a Zagreb citizen”, said Bandić and expressed hope that she will be posthumously awarded the City of Zagreb award, too.
Ana Rumanian’s mom, Marija, accepted the award “Zagreb woman of the year” in her daughter’s name from Milan Bandić and Tatjana Holjevac and thanked to city management, all donors and all citizens in the name of her family and Ana Rukavina Foundation. 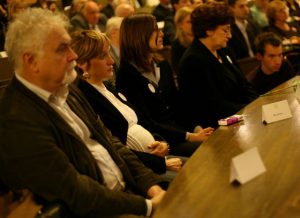 “There are many dear, good women who deserved that award, but you weren’t mistaken to award it to Ana, said Marija Rukavina and added that Croatian register of bone marrow donors is recognized not only in Croatia, but also in the world. She said that her Ana didn’t have any children, but she has the biggest family of all, a family of 13.540 donors.

To all Zagreb women Milan Bandić and Tatjana Holjevac wished a happy Woman’s day, which received the international status in the United Nations in 1975.